REPORT: The infamous slip and fall

EDITOR'S NOTE: Kandit, as promised, brings to you this chronological series on the Port 7 scandal. This story of public corruption and political intrigue is the largest and longest-running political witch hunt in the history of the government of Guam. The story begins during the first year of the Eddie Calvo administration in 2011, and continues to this day. We are producing this investigative piece because of the age of this story and the many twists and details involved.

CHAPTER 1: It started with the blow of a whistle

CHAPTER 2: 'I was sent here to fire you'

CHAPTER 3: Tydingco & Terlaje tried to smoke out whistleblowers to fire them

(Tumon, Guam) Shortly before 11:30 a.m., Thursday, September 22, 2011, Bernadette Meno entered the women's restroom on the second floor of the seaport's administration building, and slipped on the floor so quickly, she was airborne before landing on her back.

She limped to her office to tell her assistant, Jesse Aguigui, to call maintenance about a slippery film on the restroom floor that needed to be cleaned.

"Jesse, I just slipped in the bathroom and fell on my back," Ms. Meno told Mr. Aguigui.

"Boss, you have to report it to safety," Mr. Aguigui replied, referring to the seaport's safety office.

While Mr. Aguigui called the maintenance office, Ms. Meno documented the incident to safety office administrator Francisco Roberto in an email to him at 11:31 a.m. on that day:

"Just to let you know that I slipped and fell inside the women's bathroom on the second floor Admin building. There is a very slippery film on the floor near the drain in the middle of the bathroom and when I stepped on it I slipped and my feet went airborne and I landed hard on the floor even trying to brace the fall with my arm. The fall left me sore on my legs, hip, back and my arm.

"After I left the bathroom I immediately told Jesse and asked him to get someone from facility in there to wipe down the floors to make it safe again. I took Josette inside and showed her the area and when she placed her shoe on it her shoe also slid. You can still see the marks on the floor from my shoes sliding across the area on the floor.

The safety office and incident reports document these events, as well as Mr. Roberto's email response to Ms. Meno at 2:33 p.m. that same day memorializing actions taken in detail:

"Bernadette, I am so sorry about you slipping and falling in the bathroom. I sent Paul Salas to see the condition. I also spoke with Evelyn B. who oversees janitorial services for the admin bldg. She informed me that after the clean up of the bathroom the cleaner sprayed "Fabuloso". This chemical when sprayed over wet surface it will make the floor slippery for unsuspecting individual. Clorox mix 50/50 with water will clean the film and slippery condition once it dried up. Evelyn B. will have this done. Frank R." - 2:33 p.m. September 22, 2011 email reply from Frank Roberto to Bernadette Meno

"Thank you Mr. Roberto. Mr. Salas came by and took a report from me and he was very prompt and courteous. Thank you very much. Bernadette." - 2:34 p.m. September 22, 2011 email reply from Bernadette Meno to Frank Roberto

Keep a mental note as you follow this investigative report on the Port 7 Scandal: It wasn't until a year later that anyone knew who sprayed Fabuloso on the cleaned floors, as Mr. Roberto indicated happened that morning. Then-seaport deputy manager Anisia Terlaje would later confess to then-deputy chief of staff Rose Ramsey at the Governor's Office that she had sprayed the floor with the slippery substance moments before Ms. Meno entered the restroom.

Here are the undisputed and documented facts thus far:

One of the documents Mr. Salas had Ms. Meno fill out that day is a form from the Guam Workers Compensation Commission called a Form GWC-201 - NOTICE OF EMPLOYEE'S INJURY/ILLNESS OR DEATH. It is a standard form that must be filled out to document injuries, sickness, or death that occurs at worksites.

Ms. Meno wrote in the form, "I was in the restroom when I slipped on an oily substance and fell very hard on the floor hitting legs, back, arm etc."

In Box 13 for a description of the effects of the injury, she wrote: "Pain."

She signed the document at 2:02 p.m. September 22, 2011. It was sent to the Guam Workers Compensation Commission the following Monday, September 26, 2011, along with Form GWC-101a AUTHORIZATION for MEDICAL EXAMINATION and/or TREATMENT. This form was filled out by Mr. Roberto and dated by him on September 26, 2011. One of the copies of the form was given to Ms. Meno to take to a "Physician on Duty at GMHA."

Mr. Roberto wrote in this form that Bernadette Meno "Slipped and fell on restroom flr. (Admin Bldg- 2nd Flr.) felt pain in her back and right shoulder."

The form essentially gave Mr. Roberto two options to inform the GWCC of the facts surrounding the incident: either that he believes Ms. Meno's condition of pain was related to the work injury, or whether there is doubt that this is so.

Mr. Roberto checkmarked the box stating that he believes that the condition is related to the slip and fall in the restroom.

A third form was filled out and submitted to the GWCC on September 26, 2011 - Form GWC-202: EMPLOYER'S REPORT of OCCUPATIONAL INJURY or ILLNESS. This form was filled and signed by then-acting general manager Anisia Terlaje. She wrote in the description of the accident: "Employee stated she was in the women's restroom when a slippery substance believed to be Fabuloso caused her to slip and fall on the floor causing her pain in her back and right shoulder."

Ms. Terlaje indicated on the form she filled out and signed that medical attention was authorized, that the insurance carrier had not yet been notified, and that no time from work was lost on the part of Ms. Meno.

All three of these forms were sent to the GWCC via facsimile on September 26, 2011 by port safety worker Leonora Vergara-Taylor and stamp received by the GWCC the same day. 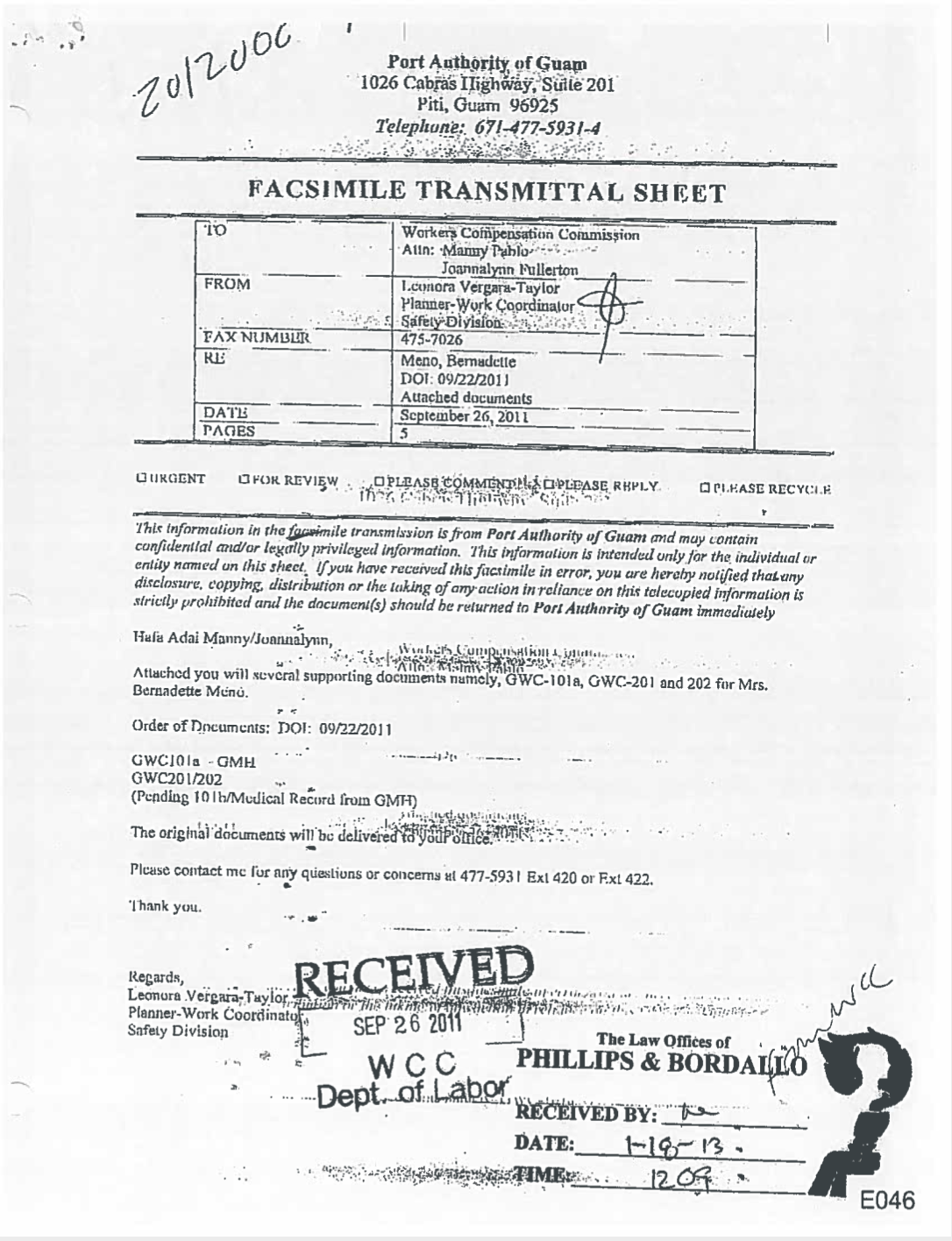 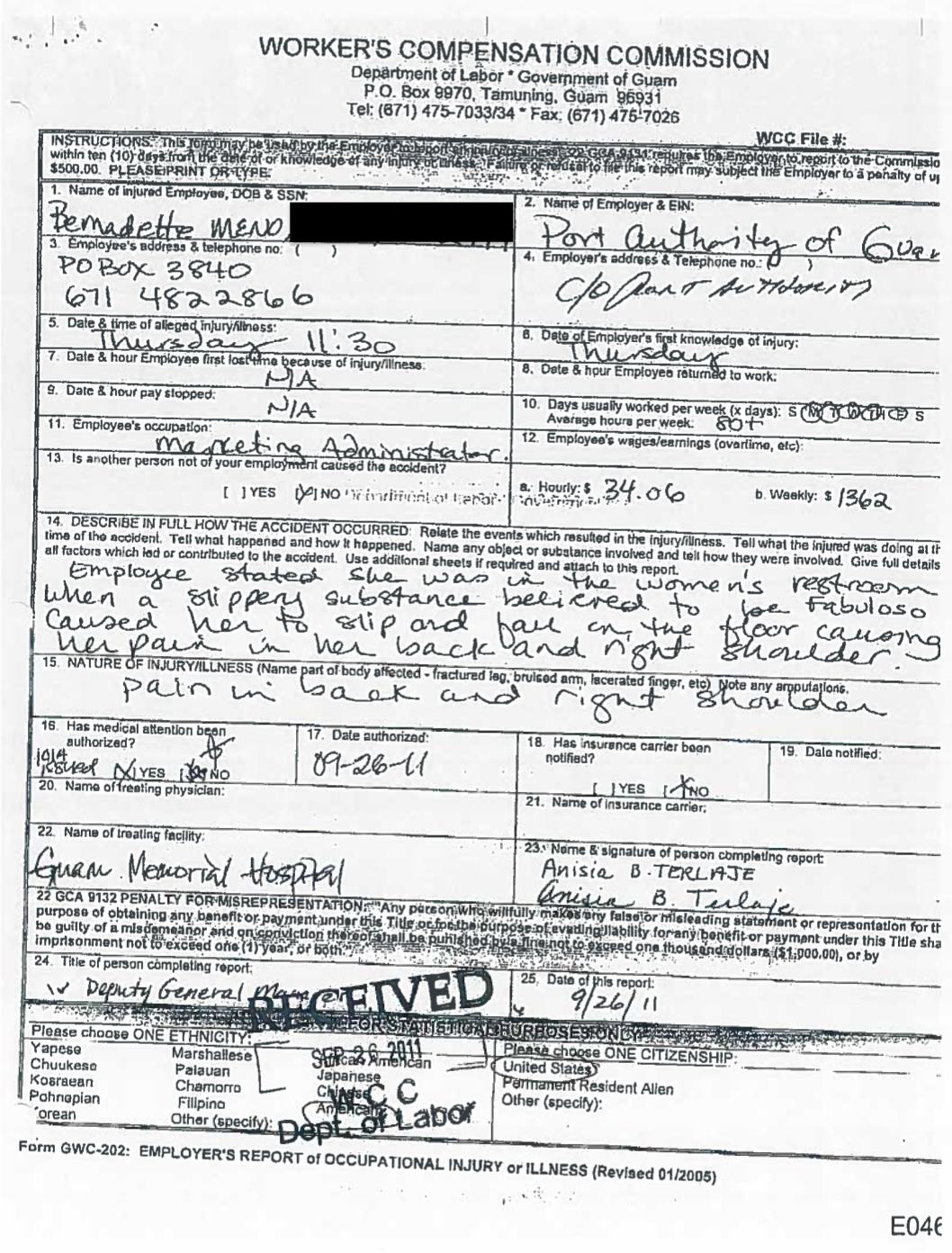 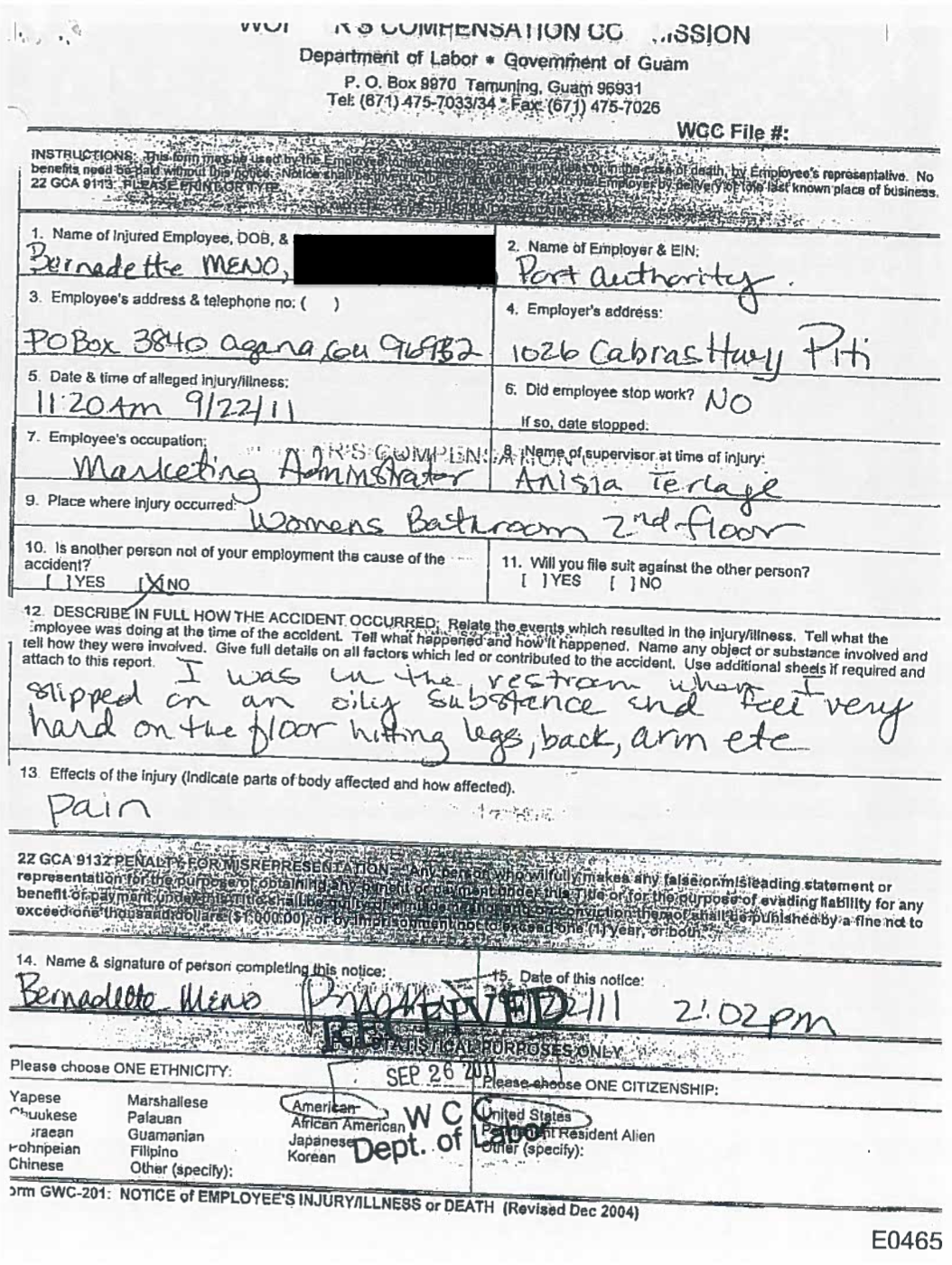 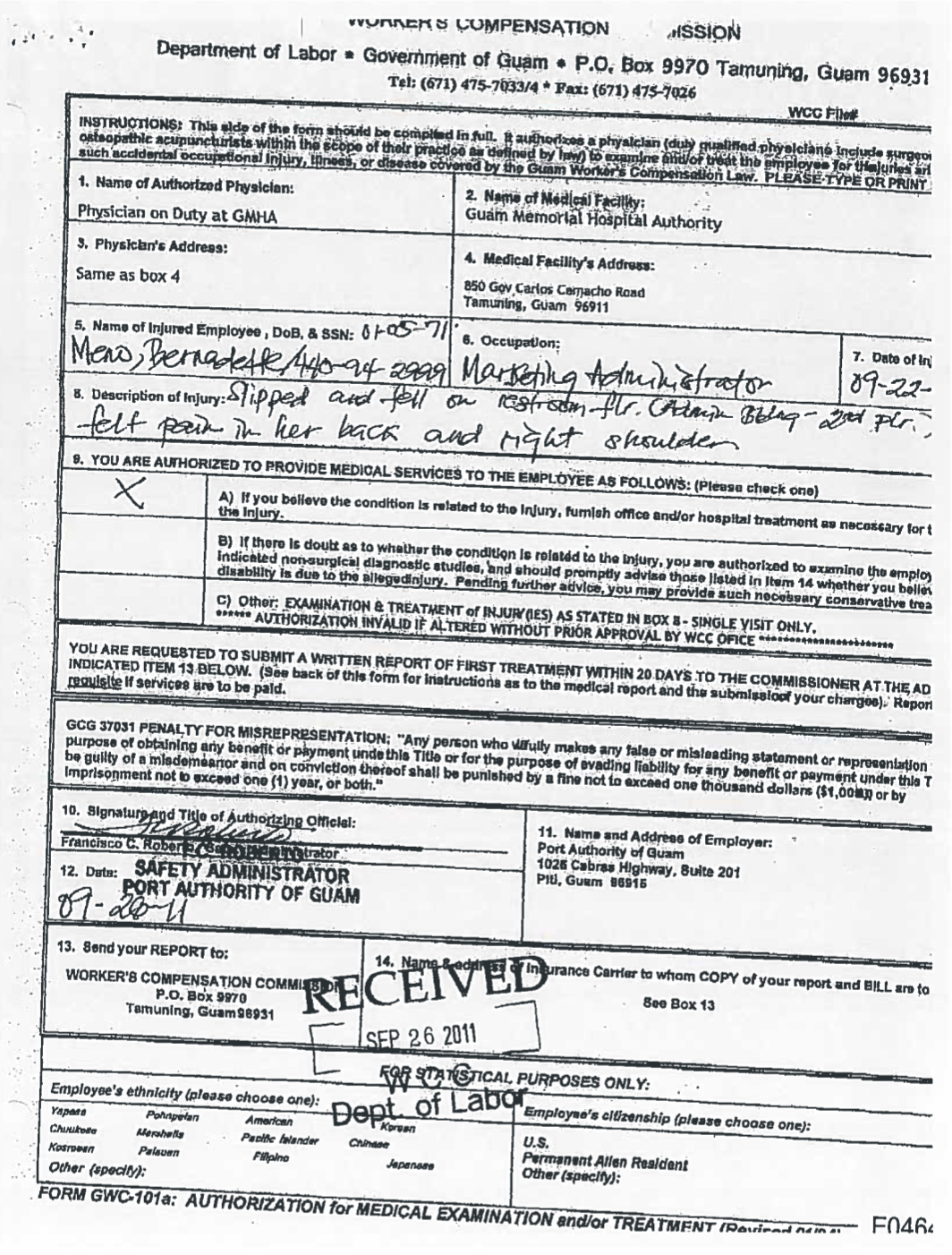 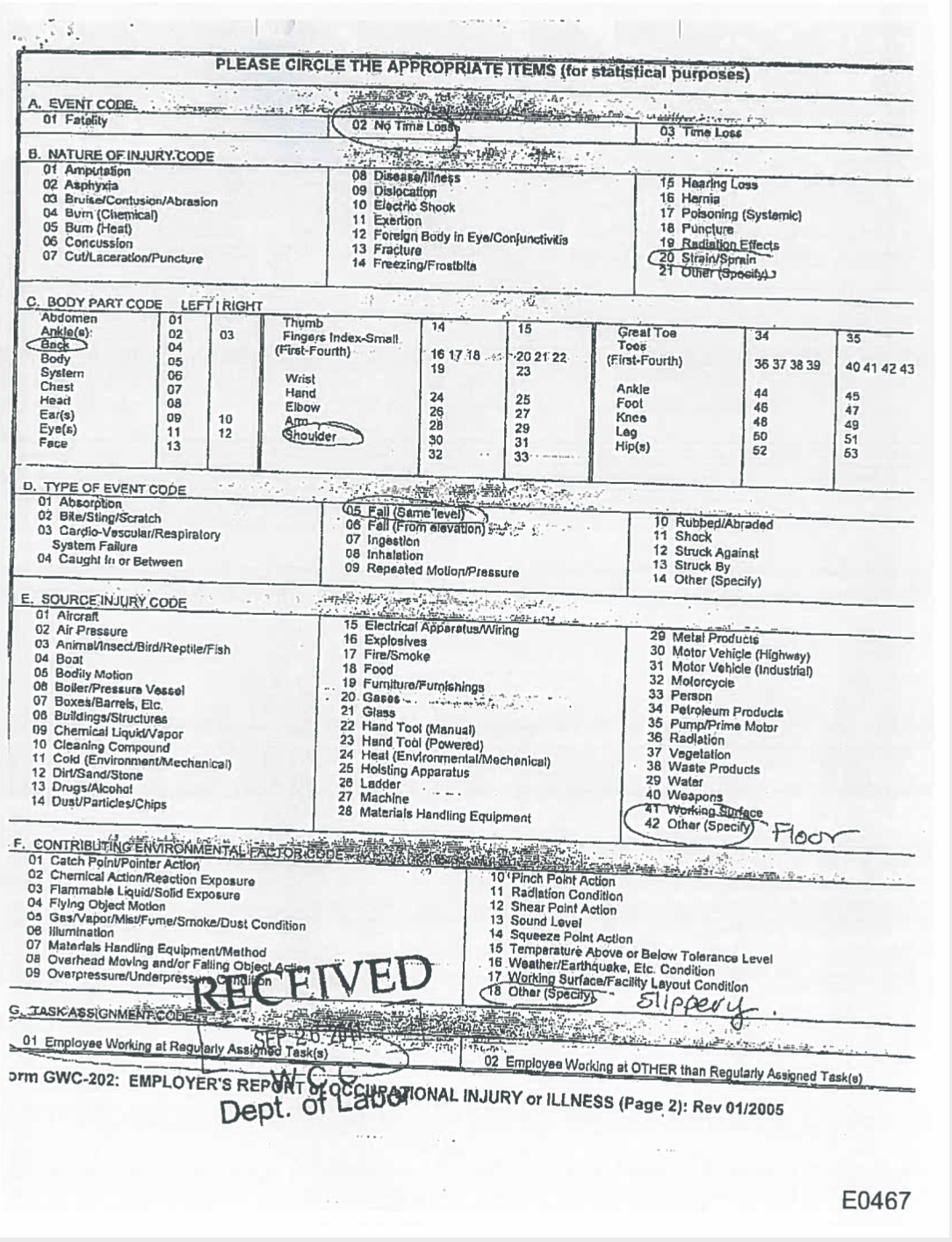 Pay attention to the names of the people in this Chapter 5 story. Over the past eight years, some of the documents discussed and presented in this story went missing or unreported to relevant investigating authorities. These documented facts match the story given by Ms. Meno, the woman named "Josette" referenced in one of the emails, Leonora Vergara-Taylor, and GWCC administrator Joannalyn Fullerton. Their stories have not changed in eight years, and these stories match what is contained in the documents.

Pay close attention to the names of the other people referenced in this Chapter 5 story. Over the course of the past eight years, their stories have changed, considerably, both during the mysterious disappearance of certain documents, and again when the documents surfaced.

Ms. Meno did not immediately seek treatment for the injury.

The injury to her back, however, turned out to be debilitating. We will bring you that part of the story later in this investigative series, but Ms. Meno eventually did have the injury evaluated by physicians, as was authorized in one of the September 26, 2011 GWCC forms submitted to and received by the GWCC.

The injury had caused a fracture on her spine, which began to grow over the months until the pain became unbearable, according to Ms. Meno's documented medical records. In case anyone doubts this claim, here are the images of the portion of Ms. Meno's spine that was injured on September 22, 2011, and fixed later with six screws in a surgical procedure that threatened her life: