REPORT: 'I was sent here to fire you!'

EDITOR'S NOTE: Kandit, as promised, brings to you this chronological series on the Port 7 scandal. This story of public corruption and political intrigue is the largest and longest-running political witch hunt in the history of the government of Guam. The story begins during the first year of the Eddie Calvo administration in 2011, and continues to this day. We are producing this investigative piece because of the age of this story and the many twists and details involved.

CHAPTER 1: It started with the blow of a whistle

(Tumon, Guam) On March 14, 2011, two classified managers at the seaport had discovered a plot by the Calvos to enrich the Calvos. The plot? Then-Gov. Eddie Calvo used his newly-appointed seaport board members to reverse course from the Camacho administration's pursuit of valuable port property from the company that had defaulted on its lease: YTK, which the Calvos had bought upon the election of one of their own.

The business venture and the continuation of the lease meant millions for the Calvo family. The two classified managers who uncovered the plot? Then-corporate services manager Vivian Leon, and then-marketing manager Bernadette Meno. They eventually were fired along with five others in December 2012 in what has come to be called the Port 7 Scandal.

It is the largest and longest political witch hunt in the history of the government of Guam, and it started on March 14, 2011, when the two managers blew the whistle on the new governor's first known corrupt act.

They sealed their fate, when they decided to speak up. Between then and their firing in December 2012, the duo uncovered all they could about the Calvos's conspiracy, and secretly turned the information over to the senator with oversight of the seaport, and to the media. They were ostracized along the way, with suspicion by Adelup of their involvement in the uncovering of the scandal growing monthly. But the harassment, threats, banishment, and punishment they endured did not stop them from investigating and whistleblowing.

After Ms. Meno and Ms. Leon discovered and told their boss - then-seaport general manager Pedro Leon Guerrero, Jr. (who worked for YTK before working at the port) - about the major conflicts that existed with the Calvos owning YTK, they delved into matters even further.

A month after the discovery, on April 12, 2011, Ms. Leon pulled Mr. Leon Guerrero aside and told him not to go into a meeting regarding YTK because of his personal conflict of interest. She told him he couldn't properly represent the port's interests and that the government's conflict of interest statute forbade his participation. He went in anyway. At the meeting were the port's legal counsel, Tony Perez, Eduardo "Champ" Calvo, and Glenn Nelson, port commercial manager. In this non-noticed meeting, the parties agreed to reverse course on the seaport's effort to take back the YTK property and to settle YTK's default amount and continue its 50-year-lease. Champ Calvo was to negotiate the settlement amount with the port.

The parties also agreed to negotiate with Champ Calvo on insurance premiums due. Unbeknownst to many, the insurance company for the project was Calvo's Insurance.

Ms. Leon also questioned the legality of the lease itself, since a new statute forbidding leases longer than five years without legislative approval went into effect during the period of the lease's default. Her concerns fell on deaf ears.

A few days later, on April 28, 2011, Mike Phillips took over as attorney for the seaport and began excluding Ms. Leon and Mr. Nelson from the YTK issue.

Then, at 9:15 a.m., on May 9, 2011, Gov. Calvo's brother-in-law and newly appointed seaport board vice chairman Mike Benito sent an email to Mr. Leon Guerrero:

"Pedro, I must admit, I'm a bit disappointed with your lack of response to me.  Frustrating doesn't even begin to describe it."

"Mike,  As per our phone conversation earlier this evening, I will be signing a  settlement proposal regarding Guam YTK Corporation by tomorrow." - Pedro Leon Guerrero's 10:43 p.m., May 9, 2011 response to Benito

Ms. Leon forwarded all the documents to the Legislature after realizing the direct involvement of Champ Calvo, Pedro Leon Guerrero, and Mike Benito in what would become a would-be multi-million dollar heist of the seaport. The arbitration over the disputed YTK lease had been held in abeyance, and now the Calvos were negotiating directly with the seaport for its interests with political hacks appointed and answerable to one of their own - Gov. Eddie Calvo.

On June 6, 2011, the Calvos made their first entrance to the negotiating table in a meeting between seaport comptroller Jojo Guevara and Jay Lather, the head of Calvo Development and representative for YTK. They discussed YTK's outstanding balance. At the time, Mr. Lather did not disclose his relationship with the Calvos and, when asked, refused to provide the identity of the new owners of YTK to Mr. Guevara.

Between June 7, and June 17, 2011, Mr. Guevara and Mr. Leon Guerrero exchanged a number of emails, where questions about YTK's ownership came about and a supposed letter for YTK.

"Anisia: Thanks very much for your reply.  Would it be possible for me to come down to the Port tomorrow morning (Tuesday) and see you?  Just name the time and I will be there. My agenda is really simple:  just  go through the issues and try to clarify our position.  We understand that there will probably be legal review and Board approval in the future – so I just want to try and get both sides on the same page as we move forward.  There has been a lot of bad feelings on this lease but I think we have a unique opportunity to actually get it resolved so both sides come out ahead. Thanks Jay"

That afternoon, Ms. Leon tells Mr. Leon Guerrero the seaport should not continue its dealings with YTK until YTK produces its new corporate documents. Ms. Leon already knew about the new ownership, and she had already told Mr. Leon Guerrero, but the Calvos had never made the disclosure, as is required in the lease agreement.

On July 19, 2011, Mr. Lather signed and sent to Ms. Terlaje an agreement that would have released YTK from most of its liabilities while solidifying the lease for the Calvos to control the valuable property free and clear of any further legal hurdles. 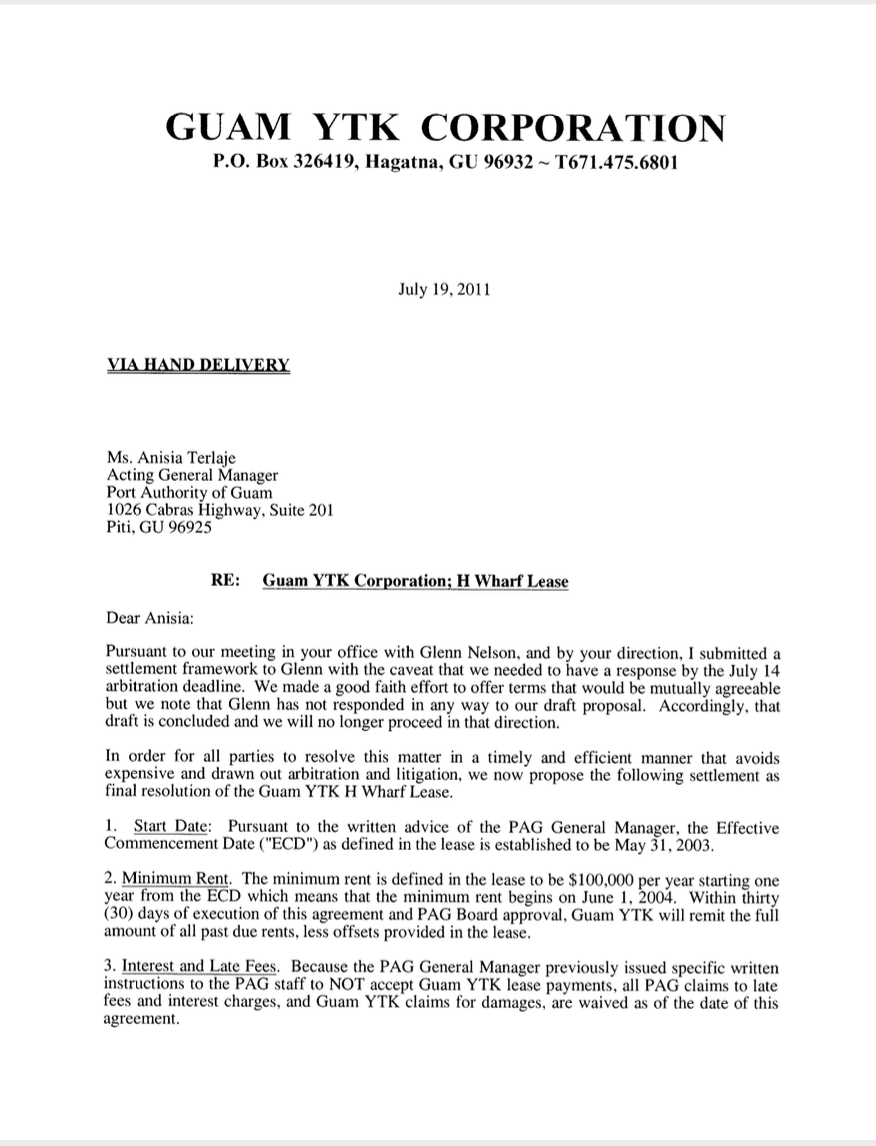 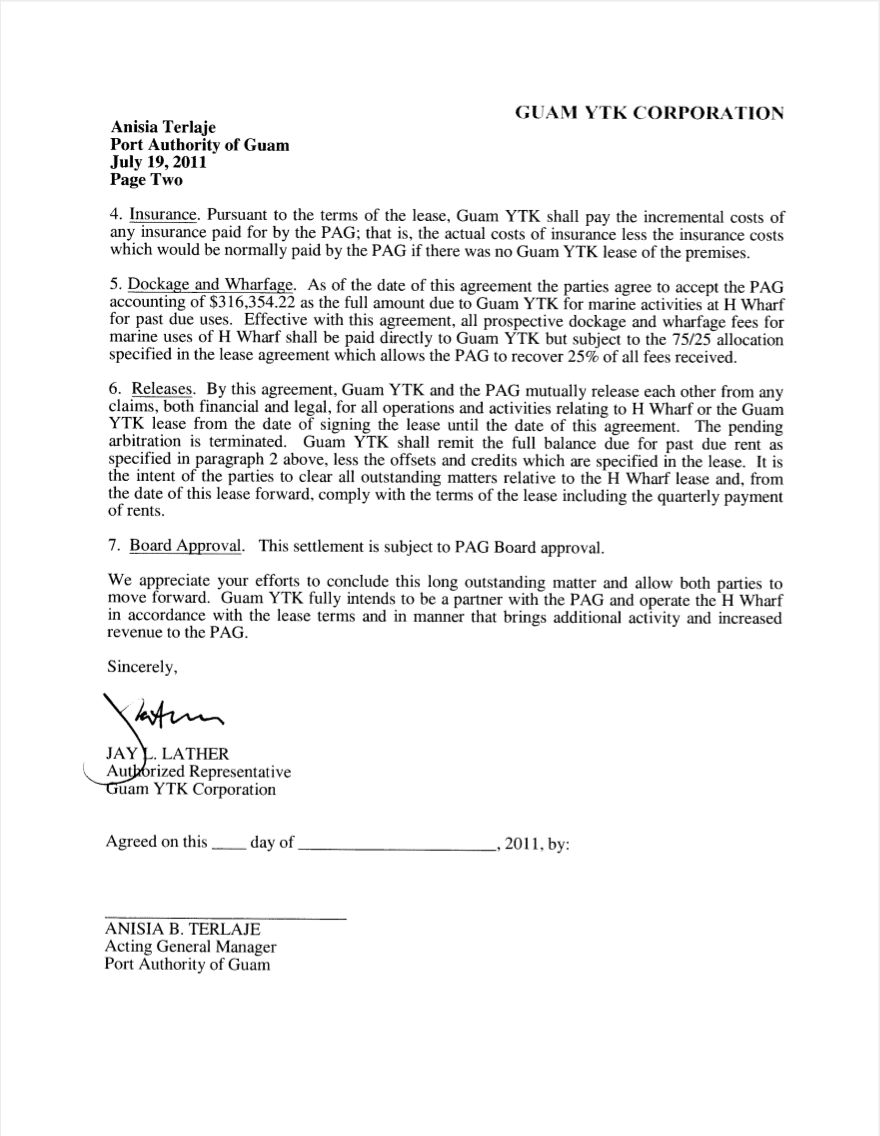 She was about to sign the document, when Ms. Leon interrupted her and reminded her that any such action would require the approval of the board of directors.

Three days later, at 2:17 p.m. on July 22, 2011, Ms Meno emailed Ms. Leon after retrieving the Lather letter that Ms. Terlaje had not signed, and informing Ms. Leon of a media inquiry about the YTK scandal by the Pacific Daily News's Steve Limtiaco:

Attached is the letter you asked me to find that Jay Lather sent to Anisia this week for her signature. Good thing you reminded her she needs board approval first. We might as well just give it to them for free.FYI - Josh said Anisia wants this placed on agenda for executive session at next week's board meeting. Anisia sent this letter to mike phillip for his review Bernadette

P.S. viv - that RFP steve limtiaco asked about is regarding Guam YTK. I am reviewing the file right now. Since it was already publicly issued can we give him the RFP? Sorry I know you are on leave today so we can chat about this Monday morning.Bernadette"

Ms. Leon forwarded the agreement to Sen. Tom Ada and informed him that the seaport board had planned to meet secretly and to approve the settlement secretly.

"I don't understand why this matter would be an Executive Session matter.  Lather's letter clearly states (in Para 6) "the pending arbitration is terminated.", or that is how they would like to see it. - - - - - - - - - - Tom Ada"

"Morning Senator – The arbitration was suspended until the Port and Lather’s firm resolved dispute.  Based on court documents, arbitration was to commence on July 12th if both parties were not able to come to terms in resolving this dispute.   Apparently this letter is stating that the Port and Guam YTK has resolved this dispute to avoid continuance of arbitration.    Agree with you, it appears that she is placing this in executive session is because she believes the agreement is still in litigation, even though Calvo & Port had executed a letter dated April 12 agreeing to dismiss without prejudice the arbitration proceedings.    Vivian" - at 8:57 a.m., July 23, 2011

Mr. Limtiaco began publishing stories that exposed the scandal. Mr. Ada called oversight hearings. Adelup began blaming Ms. Leon and Ms. Meno for the leaks in information to the legislature and to the media.

That's when Adelup gave Ms. Terlaje the green light to get rid of the two managers. But Gov. Calvo made a gross miscalculation in his planning.

In August of 2011, a new member had joined the seaport's board of directors - Shelly Gibson, who had been appointed by Gov. Calvo in May 2011. Ms. Gibson had attended board meetings during that summer between her appointment and her confirmation by the legislature, but she did not participate in any of the voting, as that would not have been legal.

Shelly Gibson and her brother, Ray

She also began visiting with port management to understand her role better. Shortly following her confirmation, she was meeting with Mr. Leon Guerrero in his office, when they both heard Ms. Terlaje screaming from her office next door.

"I was put here to get rid of you and Vivian!" - Anisia Terlaje to Bernadette Meno in an August 2011 meeting in Ms. Terlaje's office

It was a stunning revelation, and one that Ms. Gibson memorialized in an explosive email to the other members of the board of directors when the political hatchet job got underway in December 2012.

Shelly Gibson was the third whistleblower in the Port 7 Scandal, but that would not be known to Adelup for many more months.

In the meantime, the wheels on the YTK heist were moving, as was another corrupt conspiracy involving another company dealing with the seaport. Ms. Meno and Ms. Leon, during their remaining months as seaport employees, were behind every effort to expose the corruption.

Stay tuned for our next installment of this investigative report into the Port 7 Scandal.