NEWS: U.S. Probation may help, where GPD has failed

(Barrigada, Guam) Eugenio Estrellado has turned to the U.S. Probation Office for help, since the Guam Police Department still will not arrest Andrew Castro for his crimes.

Mr. Estrellado today spoke with and turned over evidence to the U.S. Probation Office of Mr. Castro's crimes against Mr. Estrellado. Mr. Castro is on federal probation until February 2022, stemming from his federal conviction for Conspiracy to Distribute more than 50 grams of Methamphetamine Hydrochloride.

Mr. Castro was raided and arrested by federal law enforcement officers on July 23, 2012, after a mail parcel containing 62 grams of meth from Boise, Idaho addressed to his home was tracked to him. On December 4, 2012, he entered into a plea agreement with the federal government, pleading guilty to the conspiracy charge in exchange for his substantial assistance to the U.S. Drug Enforcement Agency in snitching out other drug users and dealers known to him.

His cooperation with federal drug investigations continued from the date of his plea agreement to June 16, 2015, when he was finally sentenced.

Mr. Castro was sentenced to serve two years in a federal penitentiary in California, then five years of supervised release. He was released from prison on February 23, 2017, which means he remains on probation and is commanded by the Court not to reoffend.

Video surveillance shows Mr. Castro three times attempting to burglarize Mr. Estrellado's home during the early morning hours of Tuesday, January 7, 2020. In two of the incidents, he also is seen assaulting his girlfriend. In one of the videos he is seen destroying thousands of dollars in property.

The Estrellado family has called Guam Police officers twice to their residence for help. The first police response involved four officers, who refused to take evidence and did not arrest Mr. Castro despite the evidence. One of the responding officers is Tim Flores, who is Mr. Castro's very close personal friend.

On the second call for service, which happened Sunday, January 12, six police officers ended up responding about two hours after the initial call from the Estrellados and only after dozens of citizens bombarded the Hagatna Precinct with phone calls on behalf of the Estrellados. The six officers first spoke with Mr. Castro's parents, who live next door to their son, Carmen and Larry Castro. Larry Castro is a retired police captain, former assistant Federal Security Director of the U.S. Department of Homeland Security Transportation Security Agency Guam office, and Blood Money gameroom owner.

They then went to arrest Andrew Castro that night for attempted burglary and domestic violence. Andrew Castro did not answer his door, so the officers left.

Since that night, Guam Police Department has not found, looked for, or arrested Andrew Castro.

According to federal court documents, Andrew Castro enjoys a connected lifestyle brought to him by his father's substantial political connections. Among those who sent letters to U.S. District Court of Guam Chief Judge Frances Tydingco Gatewood pleading for the judge's leniency on his sentencing for his federal drug crimes was Willy Brennan, the younger brother of fellow gambling lord Connie Jo Brennan Shinohara.

Ms. Shinohara recently resigned from the seaport as its assistant general manager of administration. Andrew Castro was hired to work on the port's docks as a casual stevedore in October 2017 by former general manager Joanne Brown, and somehow received a federal security clearance to work on the docks despite TSA's disqualification of applicants who are on criminal probation for drug crimes. Ms. Brown had Andrew Castro's promotion to stevedore processed right before she left office in January 2019, however it was Ms. Shinohara who finally cleared the promotion on January 14, 2019, when she came to office.

Andrew Castro has been in trouble for violating his probation before, and could face the revocation of his supervised release this time around, if the U.S. Probation Office finds that Andrew Castro has reoffended. According to the probation office, his original sentence includes:

"Twenty four months imprisonment and five years of supervised release with the following conditions: not commit another federal, state, or local crime..."

According to federal court documents, he failed to appear for drug testing on February 20, and May 18, 2018, while he already was a government of Guam employee. On May 24, 2018, he admitted to alcohol use. His supervised release was not revoked after that finding, and despite two criminal cases in Superior Court in 2008 and 2010, where Andrew Castro was convicted of alcohol-related crimes, the federal court did not find that he would likely reoffend in any serious way.

While on pre-sentencing release between the period of his plea agreement and his sentencing, the federal court allowed Andrew Castro to remove his ankle bracelet monitor to attend a Smokin Wheels event and birthday parties. This leniency is in stark comparison to those federal defendants who request to modify the terms of their pre-trial or pre-sentencing release in order to attend the funerals of their parents and are denied their requests.

Andrew Castro's considerable political connections have served him well, despite his history of reoffending and the danger he poses to the community at large, including his neighbors, the Estrellados. But the leniency shown to him by the federal court comes with a history that involves what federal prosecutors in court documents describe as Andrew Castro's "substantial assistance" in cooperating against other drug defendants.

Put simply, Andrew Castro did not get the jail time he was facing because he turned on others known to him. Federal agents with the DEA and the Alcohol Tobacco Firearms task force moved the court to modify the terms of his pre-sentence release by having Andrew Castro remove his ankle monitor so he could perform stings for the federal government on Guam.

He had two co-defendants in his criminal case; both ended up pleading guilty but only after Andrew Castro's plea agreement occurred. According to the United States Sentencing Memorandum filed in federal court on December 5, 2014:

"In addition the United States is moving this Court to give the defendant a four (4) level decrease in his offense level pursuant to 18 U.S.C. § 3553(e) and § 5K1.1 of the advisory Sentencing Guidelines. The reasons for the Government's request are set forth in detail in the Government's Motion for Substantial Assistance, filed under seal."

Eugenio Estrellado is hopeful that the federal government will hear his plea for help and not ignore him, as the Guam Police Department has done for over a week now. 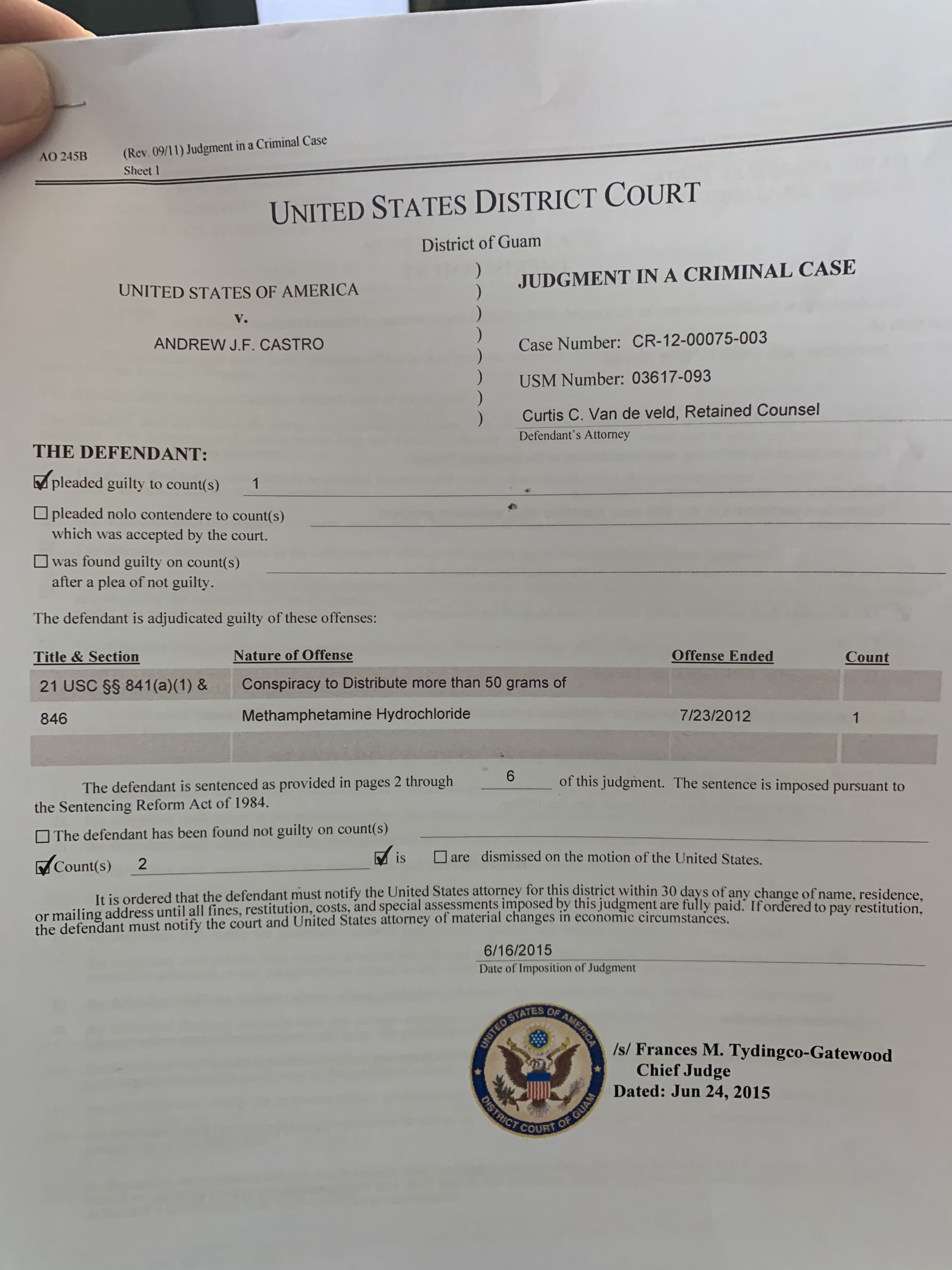 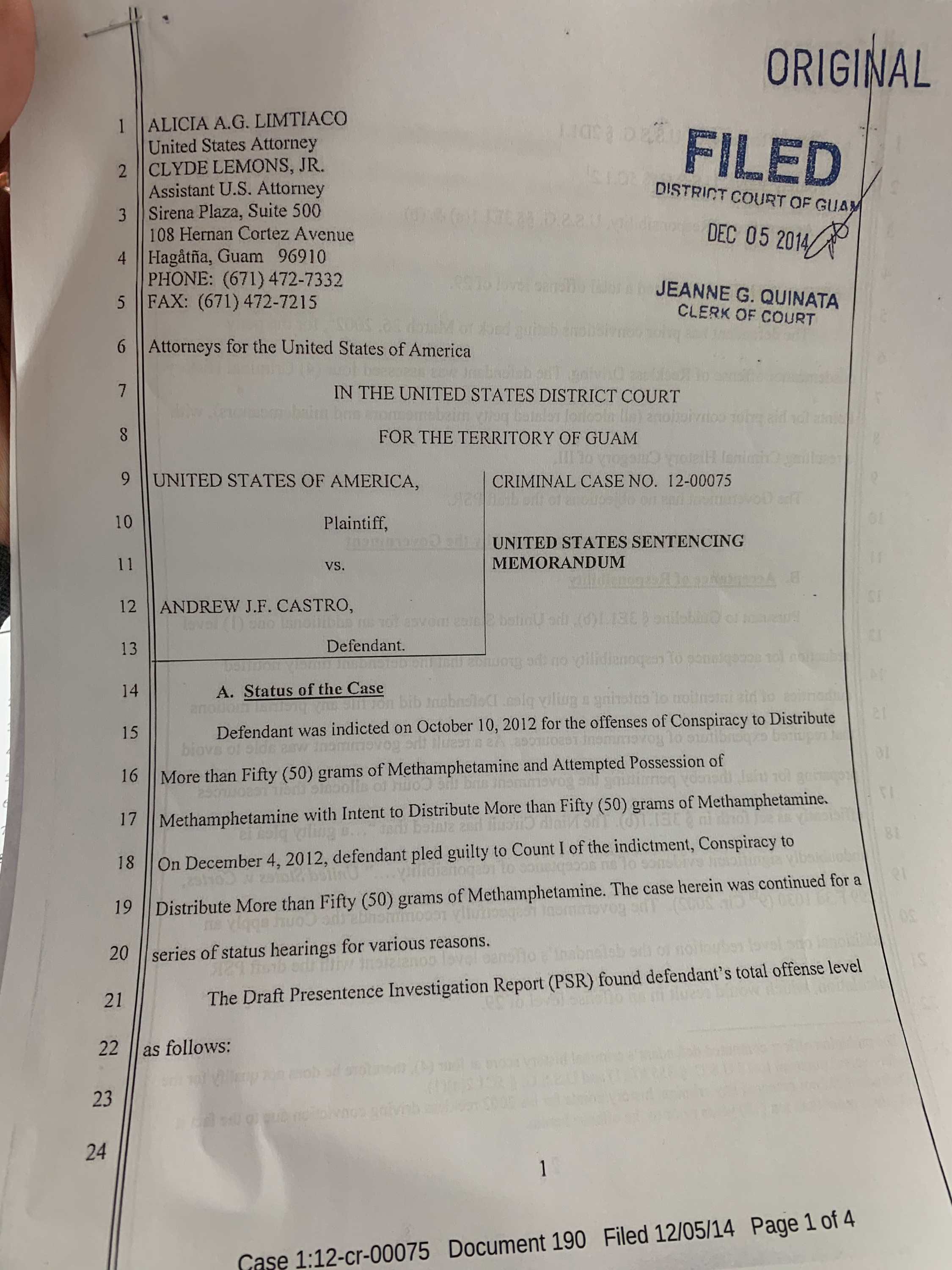