(Tumon, Guam) Public health director Linda DeNorcey denied a request from the Archdiocese of Agana to hold Mass outdoors and with proper precautions in place.

On April 22, Fr. Paul Gofigan, the chairman of the Archdiocese's Liturgical Commission and Vicar for the Liturgy, proposed a series of ways for the church to administer the Holy Mass, the Sacrament of Reconciliation, and limited-party weddings, baptismals, and funerals. This letter was sent to Ms. DeNorcey with a request for her approval, since Gov. Lou Leon Guerrero banned church gatherings in mid-March. 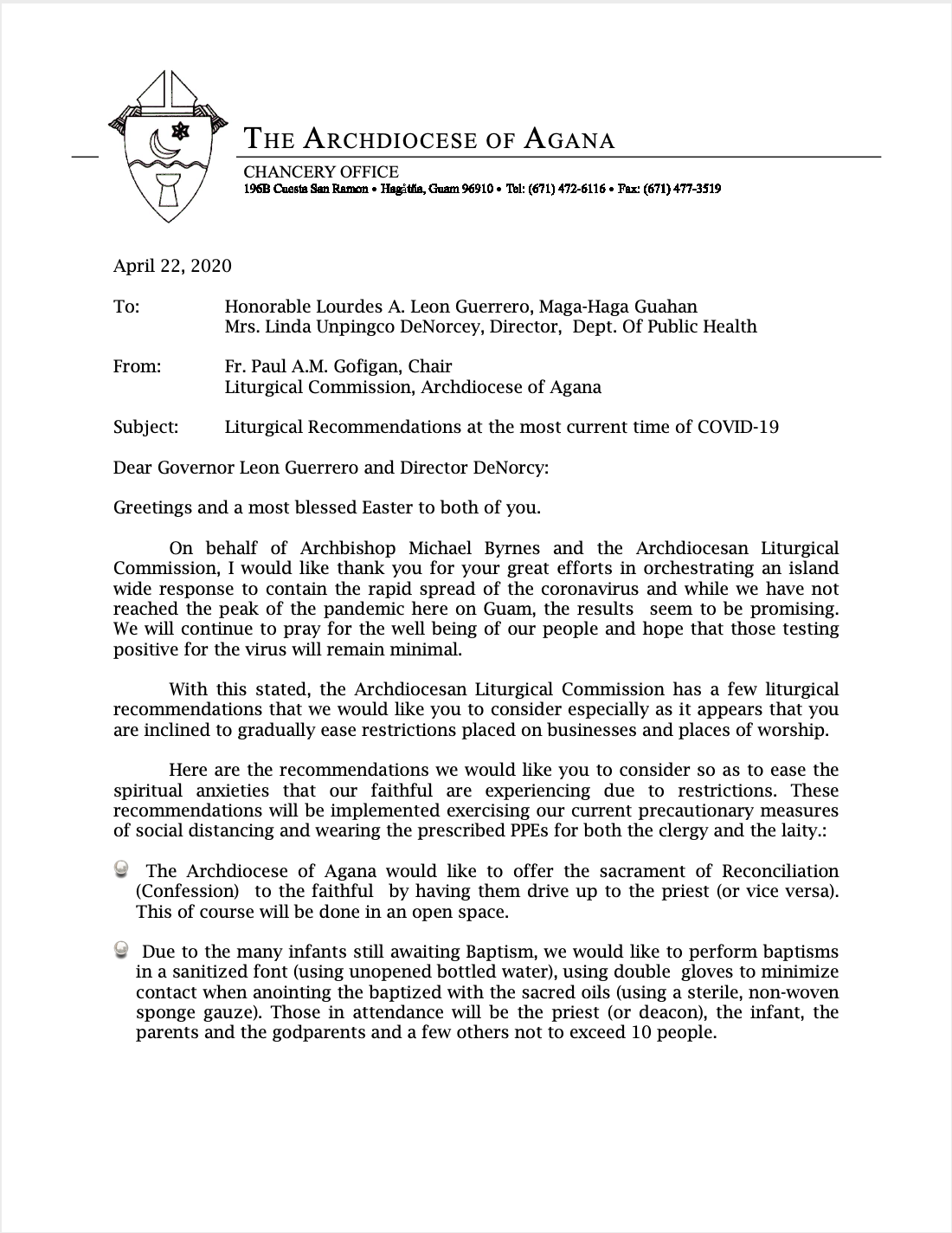 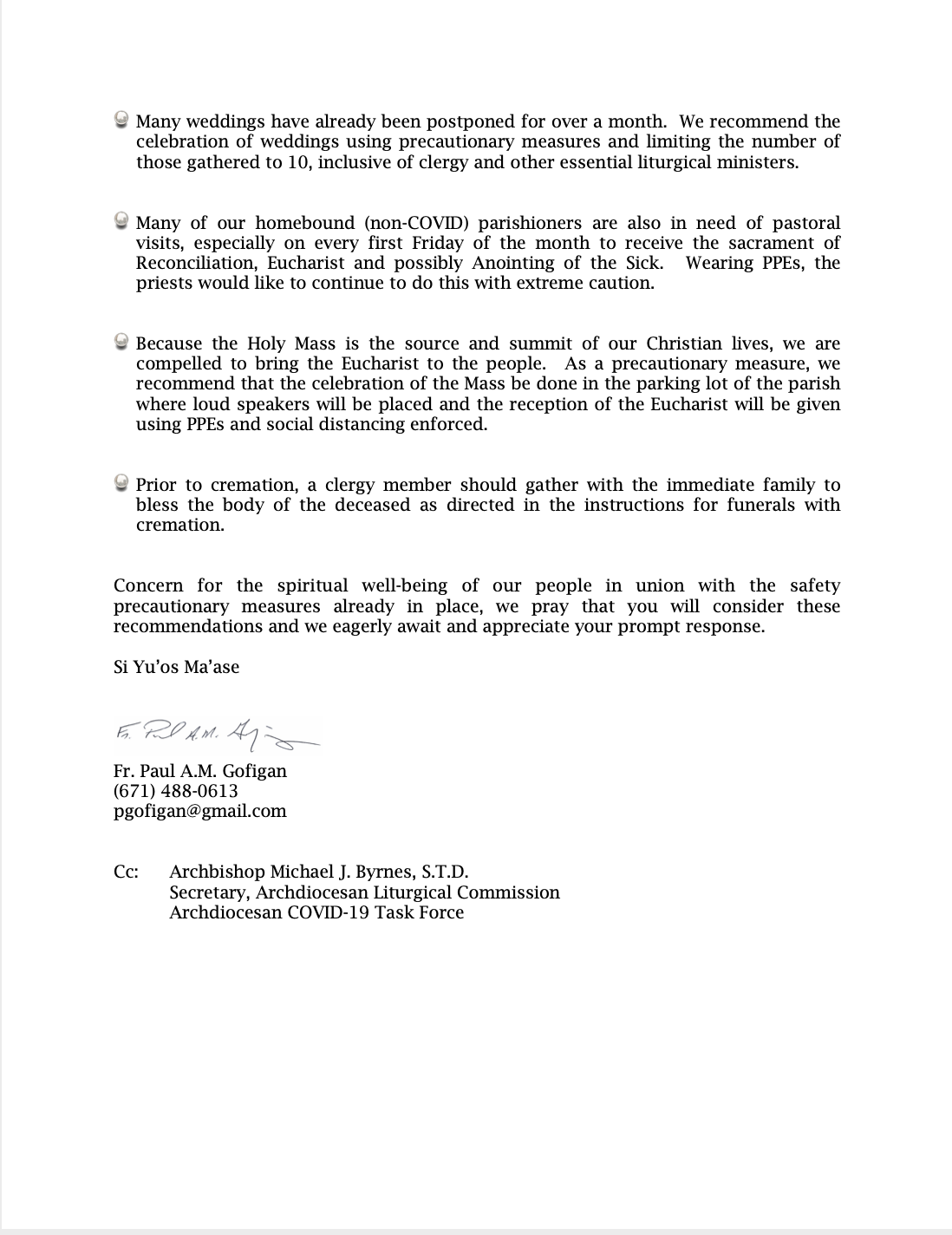 Two days later, Ms. DeNorcey responded that the Department of Public Health and Social Services "neither supports, nor approves any sacramental services even though safety precautionary measures are in place as delineated in your letter.

Mr. Gofigan detailed ways the church may continue its service in Guam:

Ms. DeNorcey did not address any of these proposals specifically, nor did she leave room for discussion on these matters, in her April 24 response to Mr. Gofigan.

The public health director and the governor, however, have allowed several exceptions to their social isolation orders, and only selective enforcement against businesses open in violation of these orders.

Hardware stores have been open, with those businesses responsible for policing social distancing and the use of personal protective equipment within these stores. Dry cleaning services are open. Restaurants are open for through traffic. Even some massage parlors in Tumon, and at least two game rooms are open for staying customers.

Mr. Gofigan decried the government's logic in disallowing the limited reopening of churches in a fiery homily he made at Mass this past Sunday, which was livecast on the Our Lady of Lourdes Catholic Church in Yigo Facebook page.

"Home Depot is open for God's sake," he said in his sermon.

"I miss you," the priest said, as he implored the Catholic faithful to demand civil justice from their government in allowing the Catholic Church to open responsibly. "My brother priests miss you."

The church's biggest argument revolves around "the source and summit" of Catholicism, which is every Christian's communion with Jesus Christ through the administration of the Sacrament of the Eucharist, or the Body and Blood of Christ. It is a physical and spiritual communion with Christ, and one that the government has denied from the Catholic faithful of Guam since the start of the public health emergency.

The Eucharist normally is administered in front of the alter of each church, with lines of people each taking their turn to receive the communion host from a priest or Eucharistic minister. The gathering of people in the pews of the church, and their lining to receive the Eucharist creates greater risk of the Coronavirus spreading.

The church, however, is proposing that its faithful can attend the Mass in their cars from the parking lots of the several churches, with a loud speaker for all to hear the Mass. Part of their proposal, according to sources, is for the priests and Eucharistic ministers, each donning masks and wearing gloves, would pass out the communion hosts by walking around to each vehicle, removing the need for people to congregate in violation of social distancing policies.

The very quick and unreasonable denial by Ms. DeNorcey of this request from the Archbishop Michael Byrnes administration of the Catholic Church on Guam coincides with hearings in District Court over the Archdiocese's bankruptcy case that evolved from more than 300 sex abuse civil cases against the church.

Mr. Byrnes inherited these cases from his predecessor, Anthony Apuron, who was the Archbishop of Agana for decades before Pope Francis stripped him on his title and exiled him from Guam for the rest of his life. Despite his exile, Mr. Apuron maintains a small, but powerful following who share interconnected financial interests in the outcome of the bankruptcy and civil cases Mr. Byrnes has been left to deal with.

Among them are the governor's family and their bank, which has even helped to shelter Mr. Apuron when he first fled Guam. The Bank of Guam is one of the largest of the Archdiocese's creditors and is a party to the Committee on Creditors in the Archdiocese's bankruptcy case. In a ruling issued by U.S. District Court of Guam chief judge Frances Tydingco Gatewood, the judge noted a bizarre disagreement revealed in last week's hearings from within the Committee on Creditors. All parties on the committee and their attorneys with the exception of the Bank of Guam agreed to hire a forensic team to identify the church's assets, believing Mr. Apuron, leaders of the Neocatechumenal Way on Guam, and Apruon's cronies still operating within the church's civil leagues have hidden millions in assets to be safe from settlement with the claimants in the civil cases.

Mr. Apuron also faces civil liability in several of the civil sex abuse cases, where he is named as a defendant for sexually assaulting several young boys. There is a political undercurrent tied to the bankruptcy case in a very real tale of an international organization's efforts to seize power in the Archdiocese.

If the Archdiocese of Agana fails to operate under the Byrnes administration, a new leader may emerge who will tolerate the Neocatechumenal Way. Read: If the church's hidden assets aren't found and churches continue to be closed and donations from the Catholic faithful held at bay, the Archdiocese may be on the fast track to insolvency.

Mr. Gofigan is not known to be one of the more political figures within the Archdiocese of Agana. He has preferred his role as a pastor of his flock, and has enjoyed wild popularity among the faithful. But just this one time, the priest has left his comfort zone, and is imploring the Catholic faithful to fight back civilly.

And while the priest of simple words speaks of the stakes for the souls of his flock, the financial and political stakes couldn't be higher in a very deep struggle involving some of the most powerful people on and off this island.

Perhaps this gives life to the reasons the very first words of the Bill of Rights of the United States Constitution reads: "Congress shall make no law respecting an establishment of religion, or prohibiting the free exercise thereof."

Can these political games be stopped? Can our government of Guam get away with these abuses? If they're paying attention to an admonishment recently released by United States Attorney General William Barr, then Ms. DeNorcey and Ms. Leon Guerrero should revisit their arbitrary decision and realize it wasn't one they ever had the power to make.