(Tumon, Guam) Many of us thought the Attorney General would do what he did today. Some of us held out hope that the AG would do what is right.

"There is not enough probable cause for us to take this to trial and to prove beyond a reasonable doubt that the officer is guilty," Mr. Camacho told reporters in a news conference Tuesday afternoon over and over.

The reporters from nearly every newsroom challenged him. What about rape cases?

Mr. Camacho and his chief prosecutor, Basil O' Mallan, said that they and their investigators repeatedly watched the viral video and interviewed the witnesses at the scene who were in full view of the strike to Mr. Carlos - three police officers. They determined that Mr. Aguon struck Mr. Carlos with an open palm.

"Did you interview the cuffed defendant as part of your investigation," KUAM news reporter Adriana Cotero asked the attorney general. He replied that because Mr. Carlos is a criminal defendant in another case that they hadn't included Mr. Carlos's testimony in their determination of probable cause to charge Mr. Aguon.

"Why wouldn't you include that," Pacific News Center anchorwoman Jolene Toves asked the AG.

"Why not let a jury decide this matter based on the evidence that already exists," Kandit asked Mr. Camacho. "I think people don't understand what 'beyond a reasonable doubt' means. It is the highest standard for us to meet. We are bound ethically from bringing a case to trial if we believe we cannot win this beyond a reasonable doubt."

"You've taken other cases to trial with far less probable cause, why not let a grand jury decide whether there is enough probable cause in this case," Kandit pushed the issue.

"Again, we are ethically bound to prosecute cases only if we believe we can win the case beyond a reasonable doubt," Mr. Camacho retorted.

"What about rape cases, where there is no hard evidence, but one person's testimony against another," we asked.

Mr. Camacho replied: "In those cases, it's if we believe the victim."

"Well then why didn't you ask the victim in this case for his testimony," Ms. Toves shot back at the attorney general.

"So, are you saying that in this case, you believe Mr. Aguon's version of the events, and that's why you're not prosecuting him," we asked.

Guam's attorney general did not address any of these questions from the media directly. He resorted to his refrain that there was not enough probable cause of a crime committed to charge Joey Aguon with any crimes.

When pressed, Mr. O'Mallan said that the AG's Office believes that Mr. Aguon struck Mr. Carlos with an open palm, despite the velocity of the punch and the likelihood that with such force at open palm, Mr. Aguon would have sprained his wrist.

"He didn't hit him hard, it was to his abdomen," Mr. O'Mallan said, as the video playing in the background showed Mr. Carlos's body recoiling from the punch. "The witnesses to the strike verified that it was an open-hand strike."

"You mean the three police officers, who were standing behind the defendant," we asked. He responded, "Yes, well they were the only ones - and the lifeguard - within view. Even the witness who took the viral video - and we interviewed him - was not within view."

That witness - Anthony Smith - the man brave enough to take that viral video of the police brutality - says otherwise. As a matter of fact, he has provided Kandit with the statement he turned in to AG investigators Anthony Camacho and Frank Santos.

His statement reads, in part:

"That was when I continued to record and caught Officer Aguon punch the arrested guy while putting him in the car, meanwhile three other officers standing by who did nothing. I stopped recording, but continued to observe what the officers were doing after securing the arrested man into the backseat of the car. All five officers were conversing with each other and laughing loudly, and then left the scene." 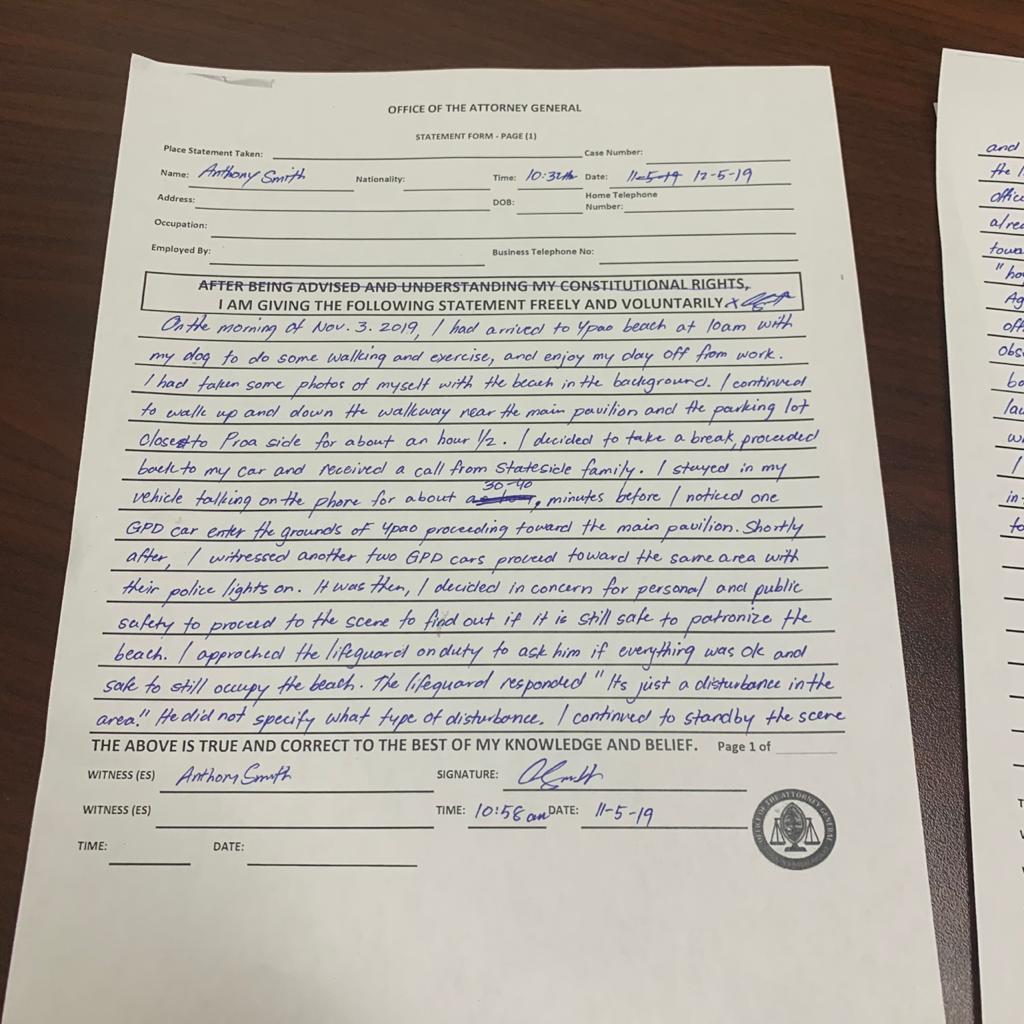 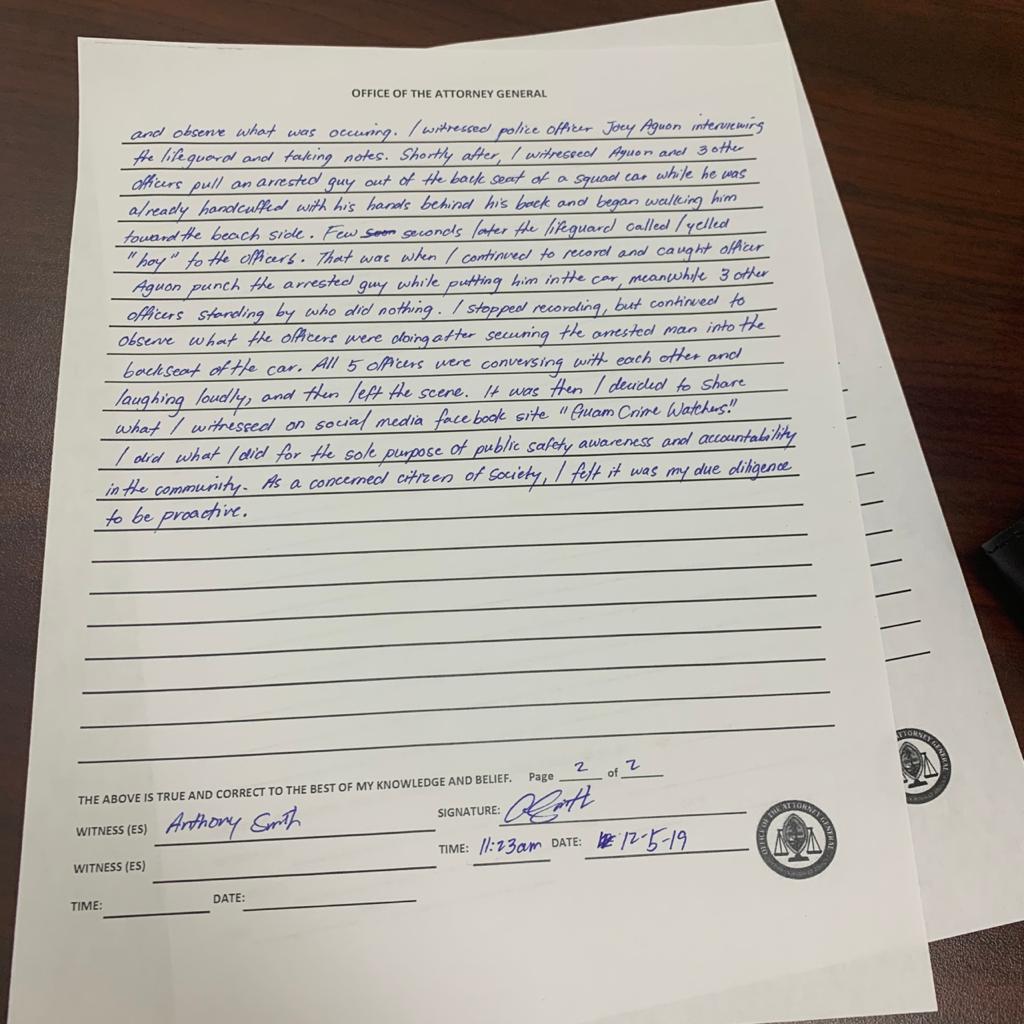 Mr. Smith told Kandit that he saw Mr. Aguon's closed fist strike Mr. Carlos. But a grand jury will never hear that testimony, or the testimony of Mr. Carlos, the victim. The attorney general has decided not to ask for an indictment.

"What do you have to say to people who may be upset at your decision to not charge Mr. Aguon," we asked Mr. Camacho.

Guam's attorney general said that he's just doing his job and following the law, and if people don't like it, then that's too bad.

The attorney general did not address the message this sends to the community about police brutality and police corruption, or the chilling effect this may have on people who want to come forward about this kind of thing.

Meanwhile, Joey Aguon now is free from local prosecution to continue to prowl the streets as he has, striking cuffed defendants and violating the rights of innocent people, as he has done in other cases.

Justice isn't blind. It is soulless.